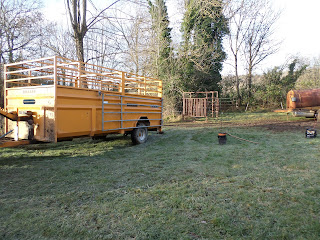 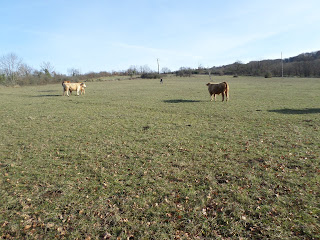 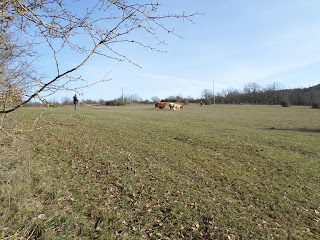 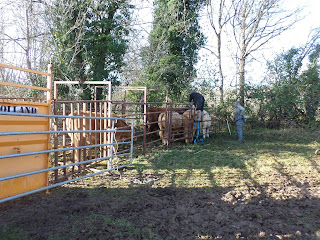 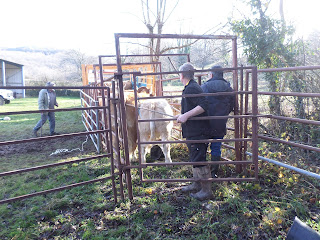 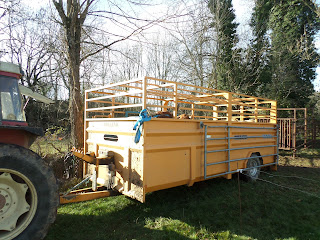 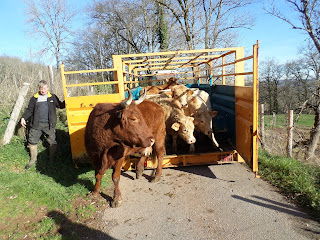 The cows at La Contie came home this morning, not that they really wanted to. It took three attempts and a bit of running to get them in a position where they could be ushered into the metal field park which contains them ready to go into the trailer. This is where the seven decided they didn't want to be contained making a break for it.

Second attempt was having a long line of rope to bring them down from the hill, I was in place to stop them going through an opening to another field, I failed at my task as the seven came running towards me on a break out mission - I was not going to argue with them and let them through as they flung their legs in the air kicking.

Last attempt was an electric fence put up (but not on, which the cows didn't know) to lead them along with farmer J enticing them back again with a bucket of food - and yes before you say you should of done that in the first place we did with individual buckets but today they went all  'sauvage'. Slowly they plodded along while I hid in the bush ready to enclose them in a smaller space with the electric fence to lead them into the park. This time it worked although Mona had to be tied in as the others were pushed in and doors quickly shut.

Now in the top field munching the last of the grass they will be reunited with the rest of the herd when they are brought up the road to join them.