Tempete and his spongy paws 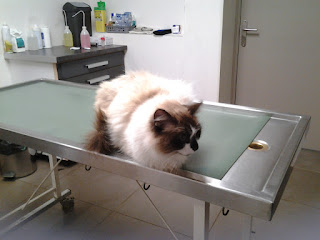 Yesterday Tempete used the new cat crate I had brought (in the hope that it wouldn't get used) to visit the vets.He had a problem with his front paw in that he was lifting it up and hobbling around, thinking there was a thorn or something stuck in his pad, which was a bit puffy off we went to see if the vet could see anything.

Turns out it wasn't a thorn as on closer inspection he has a problem with his back paw as well, looking the same, bit reddish and puffy. Cat and dog medical books were brought out in, photos of his paws were sent to a dermatologist as the vet thought it was pododermatite plasmocytaire féline (French) or feline plasma cell pododermatis (English ) or in easy words common name spongy paws.

you can read about it here if you wish. His on a 10 day course of steroids which hopefully will start to sort him out, then back in ten days for paw check. Why we can't have cats that have normal problems I don't know, still it has been good for the vets to have a case of it and at least the basket is earning its money. Shame we didn't see the young male vet though!