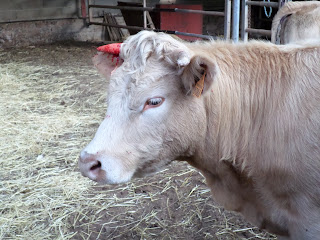 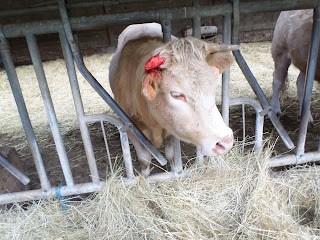 At the moment we have two young heifer cows in with a three year old steer in the hanger. One of the girls had a bit of an accident today, she lost the outside of her horn, which I am presuming came away after getting it stuck in the metal bars while one of the others pushed into her, it has happened before, cows loosing their horns and the outside layer of the horn was in the hay trough. They do grow back all eventually but think it must hurt a bit. Yes there was a bit of blood, it took a while to stop but being a brave cow she is carrying on as normal - easting hay.

We had to separate them from the herd as the steer will soon be going off but he just will not eat his cereal. He wouldn't eat it last year either I think he may prefer coco pops. As there is not a lot of goodness in the grass that's left in the fields and a bit of a scrum at the hay feeders his had to come in to make sure his eating enough hay. He will be here for a fortnight before he leaves, the girls keeping him company. Just hope we don't have too many accidents till then as it looks a bit like a crime scene at the moment.