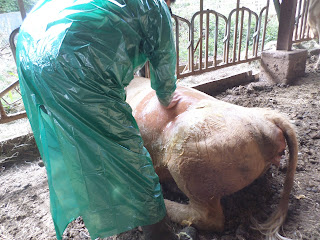 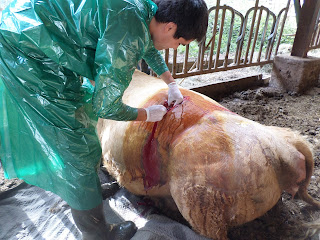 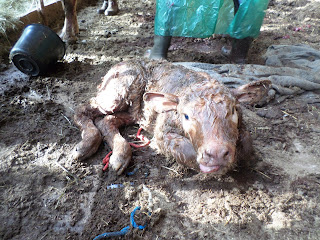 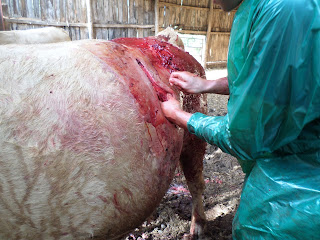 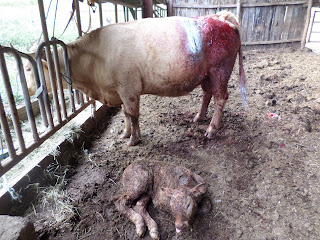 So yesterday our second calf of this year was born, sadly not so easily as the first. Mum went into labour late morning but by 3pm no signs of her progressing appeared, after manoeuvring the herd from one field to another, putting up temporary fencing along the way we managed to get mum into the hanger and called our vet. Saturday afternoons they are shut so we had to wait our turn for the emergency on call vet to come, which he did at 4pm.

On examination the calf was very big, to big for her to give birth naturally so an emergency cesarean was on the cards. An operation made a little easier when the cow is standing, this cow once locked down was having none of it and laid down, perhaps a little tired. After trying to push her up and farmer J using a winch we hadn't got very far so the procedure would have to be done with her laying down. The vet asked if we were squemish, twelve years ago I would of said yes but now I can handle most things in the animal way. The only problem is when a cow is lying down and cut her insides may come out, being more pressure than when standing but it was a life or death situation, already the vet thought the calf was dead.

So a big wash down, shave and cut was the easy bit. The hard bit was getting the calf out it took the young vet and farmer J to pull it out with cords attached to his feet and a lot of heave hooing when it gave a kick - it was alive! Quickly it was hung upside down to get rid of fluid inside it and given a few injections to get it going, and a wash in the ears (brings them around).

Now I was hoping to get some photos as this is something you don't see everyday. Farmer J has seen my insides when I had an emergency C section, however I didn't (and still don't have 4 stomachs) although he did say it was the same procedure. So this is where my hands came in. I was pushing and keeping down one of the stomachs that was trying to pop out. I can now say I have had my hands in a cows insides, of which there is quiet a lot and a fair amount of blood, along with other bits that was all a bit "alien".

For two hours the vet worked hard, farmer J held onto the rope keeping her still then a clamp so the vet could sew her womb up, I still had my hands pushing stomachs down so the vet could see where to sew, for a non vet or surgeon this was amazing to watch, and his sewing skills were pretty impresive, by this time the cow was getting a bit agitated as she could see her calf but not get to it which didn't help in the sewing up bit.

Hats off to all vets, the strength and stamina they must have and knowledge is incredible. Once sewn up she was able to meet her calf, who is now doing well. He had a swollen head and tongue so couldn't feed from her last night, colostrum was hand syringed into his mouth. His now feeding well and a lot cleaner thanks to mum. She has just had a visit from the young (good looking French) vet, she has a bit of a raised temperature, isn't allowed to eat too much hay and needs antibiotics twice this week which will be fun administering. At least it may be a bit easier to get the calf's ear tags in this time.