Taking down the poly tunnel 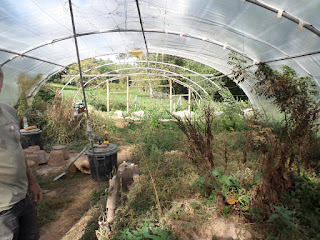 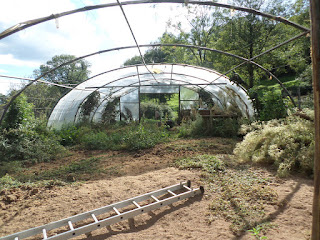 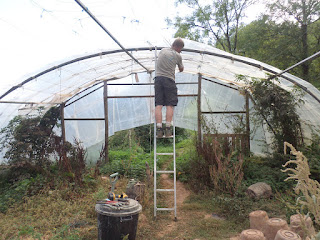 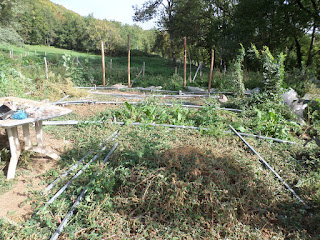 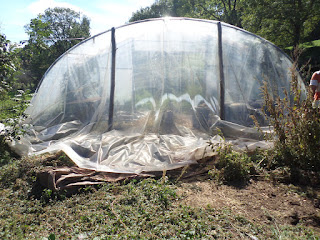 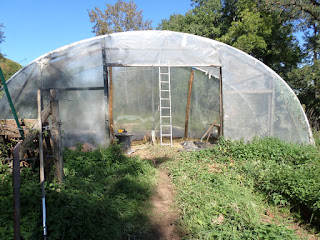 The weekend was spent dismantling the 25 meter poly tunnel which we erected around 9 years ago. The past couple of years it hasn't been used, apart from shelter for the donkeys and keeping the pigs cereal dry. It was just to much work to keep growing veg in it and in summer too hot as the only free time to work in there was in the mid day heat - not good for an  English rose.

So plastic was dug out from one half and kept for the other as part of it was to remain. When it was erected there was six of us bringing it down there was two, with the metal frame wobbling at times it finally came down leaving the four wooden poles of the end where a wooden frame was once attached with metal poles tied on.

The frame has been moved to the silage pit to make a 20 meter tunnel to house the machinery. Metal posts are being cut to size ready for collection on Wednesday. Farmer J has driven to local garages collecting oil drums which will be filled with concrete (I spoke to soon on my last mixing of concrete) where a metal post will sit ready for the each arc of the frame end to sit in heightening it enough for the tractor to fit in. New plastic will be brought tomorrow to cover it.

The wood pile has had to be moved, now under storage by this years pile ready for next year although there does seem a lot of logs to get through so with aching backs and splinters we will recuperate until the mixing of concerte - cant wait for that!

As for the five meters that has been left a trench was dug the half of plastic left cut to size for a new back to make it weather proof with the two large posts helping to support it. It is still to store the pigs food but makes for the size of poly tunnel I was thinking of all those years ago, much more manageable. I have yet to break the news to Vanille and Bambo that they will no longer be able to shelter in their favourite tunnel.