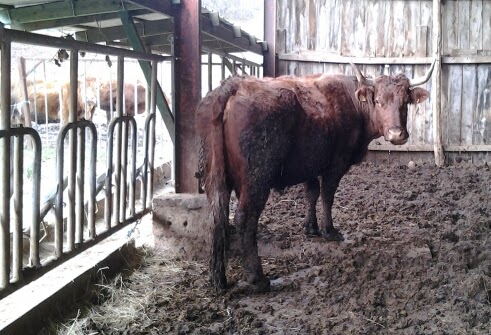 Mona, our eldest cow started limping last week. Thinking she had foot rot back as it is so wet on the ground at the moment she was treated. When it came to Saturday and her limping and swelling hadn't gone down it was time to call in the farrier.

He came on Monday with his portable crush on a trailer( I was at my spinning meeting so could not record how the event went). She has had a pedicure where when he cut the hoof back he found a  piece of metal which she had trodden on and over time the skin had grown over. Trimming the hoof and removing the abscess once cleaned the foot was  bandaged to hold a piece of wood which has been stuck on with resin to heightened the half of her hoof that's OK and relieving the cut half, this will come off in time when the bandage is removed on Friday.

She is now putting weight on the back foot so hopefully it will of healed and cause her no more pain. The only problem is she has to stay in the hanger till then, which has meant lots of barrier to-ing and fro-ing and her having to be chained to a rail so we can keep her in while others are shut outside or let in to the hanger. The first night she was left in a chain which was used for a bull by the old farmers, a time when all cows were chained to the mangers for the winter months, that's until 2am when farmer J released her as she wouldn't stop mooing. Not sure she could remember back to her previous life before us and only hope she understands this treatment is for her own good.