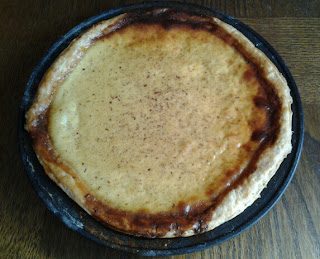 After watching this weeks episode of The Great British Bake Off I was inspired to make a custard tart. As farmer J and I laughed at the contestants attempts of turning out their tarts we both said at the same time, having a Darby and Joan moment `cor, I use to love a custard tart'.

Not wishing to have the same horror of stuck individual tarts I made a big one, pre cooking the pastry hence no soggy  bottom. It turned out pretty rustic after slopping custard over the sides before cooking due to tripping over sous chef, aka Milo (he did do a good job of clearing up spilt custard on floor).

The silver fox was a tad harsh in this episode I thought. Saying that the chances of a pie having a soggy pastry bottom (and top in some cases) is pretty high if the pastry and wet filling are cooked at the same time I think, thought the contestants might of worked that one out before hand. Who is to win? Howard's too nice, crying when Ali left, it's a competition!  Frances is concentrating on her artistic side, could it be Ruby or Kimberly or is Rob going to steal the show?


Biscuits next week, only hope they have sneaked in a sheet of magic non stick liner - I would have a roll brilliant stuff!