August 16, 2013
Sadly I found the little sparrow I was trying to nurse back health dead this morning. It may of been down to my oat bran meal I made for him or my lack of nursing skills. Probably should take off being a carer from my  'when I grow up I want to be job list '.

Perhaps I should of tried my hand at acting and gone to the extras casting in St Antonin this week along with all the other expats who are eagerly waiting to be in a scene in the film being shot by Steven Spielberg in September, set in this area. 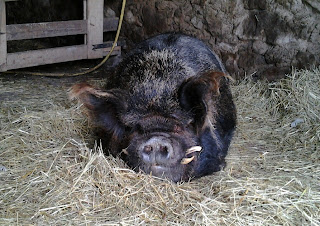 Gorgon has his hearing back, the grunt and whine of a starved pig can be heard when he hears you approach the barn doors. Watch out gite guests his on fine form waiting for tasty treats. Wonder if he could get a staring role, the films based on a book where an Indian restaurant opens up opposite a michelin stared one. Food based sounds good..